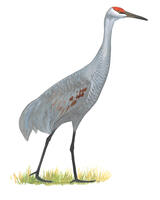 Last week, Audubon Nebraska submitted a legal objection to a proposal that would transfer water from the Platte River to the Republican River. Audubon is concerned that transferring water out of the Platte River Basin, already crucially short on supply, could have drastic negative impacts on the ecosystems, birds and waterfowl, and people that depend on it.

The purpose of the proposed interbasin transfer is to help Nebraska meet its water delivery obligations to Kansas under the Republican River Compact, a water sharing agreement set in place between Nebraska, Kansas, and Colorado in 1943. But Nebraska, along with Colorado, Wyoming, and the federal government, is also a party to a legal agreement along the Platte River and has a responsibility to balance an overused water supply for Endangered Species Act compliance. In more years than not, especially dry years, the agreement’s water goals have not been met.

“Over the years, Nebraska water users have put a lot of money and effort into increasing streamflow,” said Melissa Mosier, Platte River Program Manager for Audubon Nebraska. “Continuing to make a good faith effort to protect Platte River streamflow isn’t just good for birds and wildlife - it also protects the interests of people who use water from the Platte.”

If the transfer is approved, water would be taken upstream of Audubon’s Rowe Sanctuary, which lies along the portion of the river that is critical habitat for endangered and threatened species. Depriving the Platte of the natural streamflow running through this portion of the river could jeopardize decades and millions of dollars’ worth of work done to ensure the Whooping Crane, Least Tern, Piping Plover, Sandhill Crane, and other waterfowl have the habitat they require for feeding, roosting, and nesting.

Transferring this water would also transport invasive fish and plant species into the Republican River Basin, which will require constant and expensive efforts to control. In 2018, Kansas Governor Jeff Colyer wrote a letter in opposition to this proposed transfer because of the ecological and economic harm that the introduction of bighead and silver carp could cause along the Republican River. Once these fish enter a stream or reservoir, the safety and value of fishing and recreation is greatly reduced.

When above-average streamflow occurs along the Platte, this water is not “excess” or wasted, but instead provides important services to our communities. These flows provide groundwater recharge, an important resource for irrigators in drought years, and ensures that the groundwater pumped for uses such as drinking water, sanitation, and local industries are sustained. Higher than average flows along the river also transport built-up sediment within the river’s channel, preventing flooding.

To protect these vital services within the Platte River Basin, and the public interest in both the Platte and Republican River Basins, the interbasin transfer application should be dismissed.

If you have questions about Audubon Nebraska’s objection to the Platte-Republican interbasin transfer application, visit ne.audubon.org or email nebraska@audubon.org. Another Consequence of Suppressing Wildfire: Trees Are Invading the Prairie

Left unburned, woody vegetation is crowding out habitat, but proactive landowners are learning to use fire to restore America’s grasslands. A Win for Whooping Cranes: Court Vacates Permit for R-Project

June 17 marked a win for the endangered Whooping Cranes when the District Court of Colorado vacated the permit for the “R-Project,” a 225-mile electrical transmission line.